Judith Ritter is an award-winning independent radio and print journalist whose reports from Canada, China, India, Europe, the Caribbean and the U.S. cover travel, science and technology, business, entertainment and international development.

Her stories have aired on public radio at the national level in the U.S. and in Canada. Her print stories have appeared in numerous outlets including The Globe and Mail, The National Post, The Boston Globe, South China Morning Post, Singapore’s Straits Times and many magazines.

She has introduced audiences to the work of bomb squads, big rig drivers, longshoremen and tugboat captains and she has covered far-ranging issues such as labor abuses in China, the plight of homeless children in India and trends in higher education. She is a fearless traveler and hopes to brighten the world one story at a time

Generosity is the key for a new European import
Marketplace Town for Tots
The Straits Times 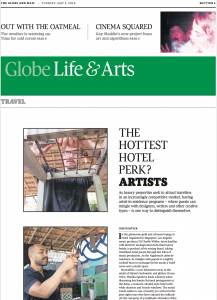 THE HOTTEST HOTEL PERK? ARTISTS
The Globe and Mail Send me a direct message